Congratulations Luis and Puri for that a new SINGEK paper published in Genome Biology and Evolution: 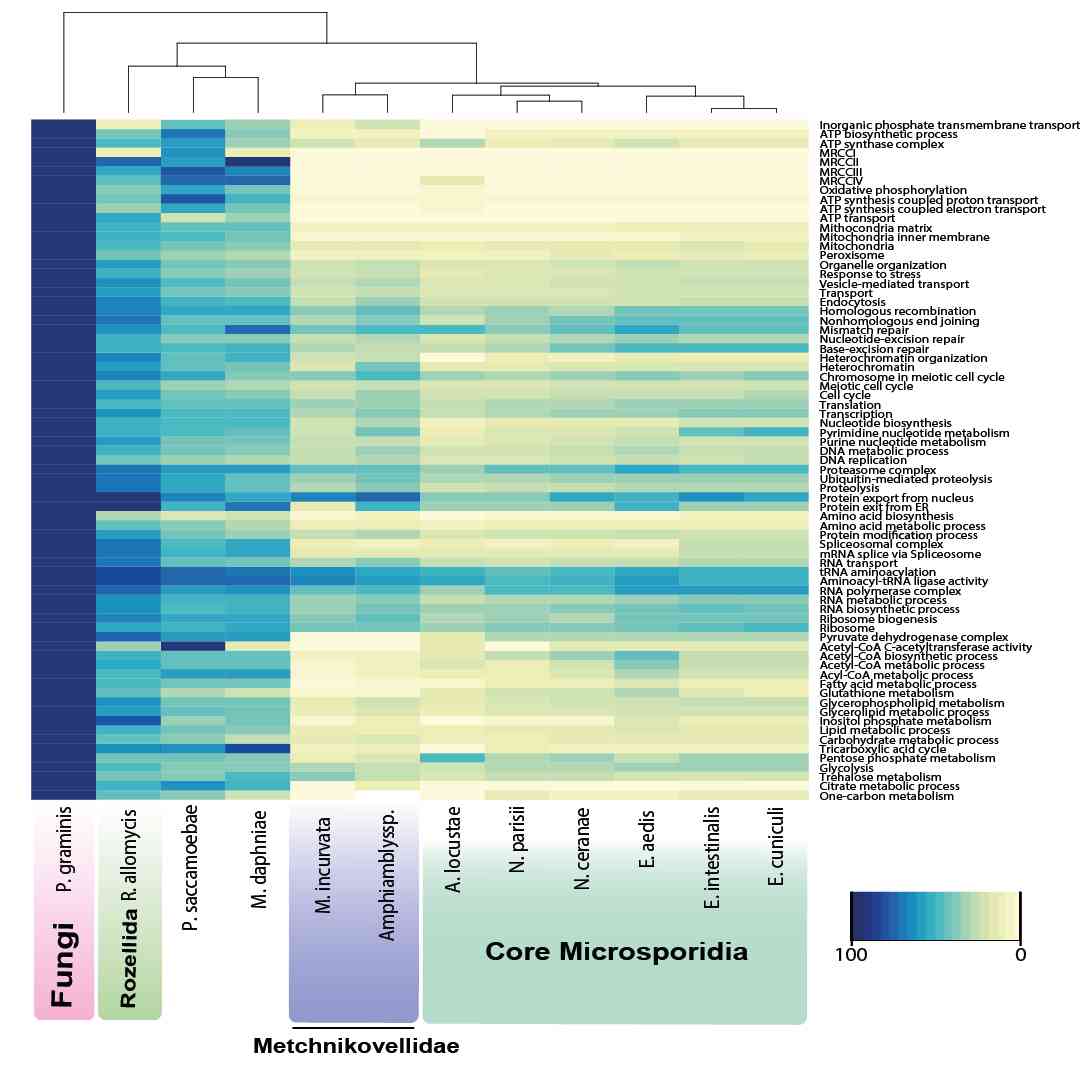 Heatmap illustrating the conservation of pathways and structures in metchnikovellids
and neighbor lineages. It is based on 73 Gene Ontology terms (GO), identified using EggNOG
(Huerta-Cepas et al. 2017) for 12 Holomycota representative proteomes. Sequences obtained
in this study are highlighted in black. Colors indicate the percentage of annotated genes with
a GO term.

Metchnikovellids are highly specialized hyperparasites, which infect and reproduce inside gregarines (Apicomplexa) inhabiting marine invertebrates. Their phylogenetic affiliation was under constant discussion until recently, when analysis of the first near-complete metchnikovellid genome, that of Amphiamblys sp., placed it in a basal position with respect to most Microsporidia. Microsporidia are a highly diversified lineage of extremely reduced parasites related to Rozellida (Rozellosporidia = Rozellomycota = Cryptomycota) within the Holomycota clade of Opisthokonta. By sequencing DNA from a single-isolated infected gregarine cell we obtained an almost complete genome of a second metchnikovellid species, and the first one of a taxonomically described and well-documented species, Metchnikovella incurvata. Our phylogenomic analyses show that, despite being considerably divergent from each other, M. incurvata forms a monophyletic group with Amphiamplys sp., and confirm that metchnikovellids are one of the deep branches of Microsporidia. Comparative genomic analysis demonstrates that, like most Microsporidia, metchnikovellids lack mitochondrial genes involved in energy transduction and are thus incapable of synthesizing their own ATP via mitochondrial oxidative phosphorylation. They also lack the horizontally acquired ATP transporters widespread in most Microsporidia. We hypothesize that a family of mitochondrial carrier proteins evolved to transport ATP from the host into the metchnikovellid cell. We observe the progressive reduction of genes involved in DNA repair pathways along the evolutionary path of Microsporidia, which might explain, at least partly, the extremely high evolutionary rate of the most derived species. Our data also suggest that genome reduction and acquisition of novel genes co-occurred during the adaptation of Microsporidia to their hosts.