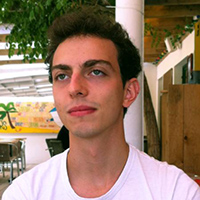 I am a computational biologist from France and received a MSc in Bioinformatics at the Université d’Evry Val d’Essonne in 2015. During the completion of my degree, I worked on several genomics research projects. As intern at EMBL-EBI (Cambridge, UK), I developed a functional analysis web tool for comparison of metagenomic samples (doi: 10.1093/nar/gkv1195). During the final year of my master’s degree, I joined the Institute of Systems and Synthetic Biology (Evry, France) to work on a suite of tools for the analysis of genome layout and its interplay with genome architecture and gene expression (doi: 10.1093/nar/gkw384). There, I also had the opportunity to participate in iGEM, a synthetic biology competition, where I developed a pipeline for the prediction of patient-specific candidate antigens from RNAseq data. All these experiences confirmed my interest for omics data analysis, bioinformatics tools development and biological data visualization.

After graduation, I kept on working at the Institute of Systems and Synthetic Biology for a year as bioinformatics engineer and took part in a cancer genomics project. My main focuses were the reconstruction of regulatory networks from expression data and the development of a novel algorithm for cis-regulatory elements prediction.
I am now PhD student at Ghent University – VIB (Ghent, Belgium). My PhD project (ESR 10) will consist in developing new tools and methods for the comparative and functional analysis of genome and transcriptomics data of unknown microeukaryote organisms. Those will then be used to analyze the evolution of gene families, horizontal gene transfers and gene pathways in phytoplankton datasets.