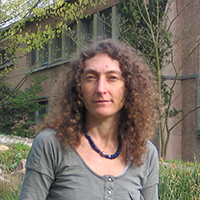 Purificación López-García is a Research Director working for the French CNRS and the leader of the “Microbial diversity, ecology and evolution” research group at the Ecology Systematics Evolution unit (CNRS & University Paris-Sud/Paris-Saclay; http://www.ese.u-psud.fr/rubrique7.html?lang=en). She obtained her PhD in Sciences (Biology) from the Autonomous University of Madrid (Spain) in 1992, working on the genome structure of halophilic archaea. She spent several years as postdoc (Marie Curie fellow and others) and associated professor in various institutions (Université Paris-Sud, France; Universidad Miguel Hernandez and Universidad de Alicante, Spain; Université Pierre et Marie Curie, Paris, France), before  she  entered the CNRS as a researcher in 2002. Her scientific career has been marked by a profound interest on the extent and limits of life and on how evolution has led to the diversification of major organismal lines. Her research group combines complementary approaches, from the exploration of extant prokaryotic (archaea, bacteria) and eukaryotic diversity in diverse environments, including extreme and strongly mineralized settings, to phylogenomics and metagenomics, with the aim of elucidating the order of emergence of the different microbial groups and testing hypotheses on early biological evolution. She is the PI of the ERC-AdG grant ProtistWorld focusing on eukaryotic diversity and evolution and she has recently implemented the  UNICELL facility devoted to single cell ‘omic’ studies (http://www.ese.u-psud.fr/rubrique163).