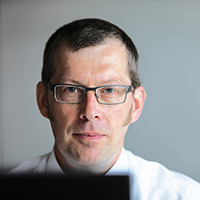 Ivo Gut is a Director of the Centro Nacional de Análisis Genómico (CNAG) in Barcelona, one of the largest European genome sequencing operations, which he established in 2010.

His research interests are genomics, genetics, high-throughput nucleic acid analysis methods, proteomics, implementation of –omics methods, omics technologies, automation bioinformatics, data analysis, disease gene identification, cancer genomics, agrogenomics.  He has more than 20 years experience in high-throughput nucleic analysis (genotyping and sequencing DNA, RNA and DNA methylation), technology development in nucleic acid and protein analysis.  He was Head of Technology Development and Associate Director at the Centre National de Génotypage (CNG) – CEA (1999-2009), where he established the highest throughput genotyping platform in Europe and executed many genome-wide association studies, he initiated and was the coordinator of the EU-funded Project READNA in which 2nd, 3rd and 4th generation nucleic acid analysis technologies were developed.  READNA Consortium was awarded with “Stars of Europe” Prize from the French Ministry of Higher Education and Research in 2013.  He received his PhD in Physical Chemistry from the University of Basel in 1990.  After his appointments as Research Fellow at Harvard Medical School and Imperial Cancer Research Foundation of London, he led a group in the Department for Vertebrate Genomics at Max-Planck-Institute for Molecular Genetics. He is author of more than 300 research papers, 11 reviews and 12 book chapters, cited over 21 000 times, inventor of 25 patents or patent applications, founder of 4 biotech start-ups, and serves on numerous international advisory boards.