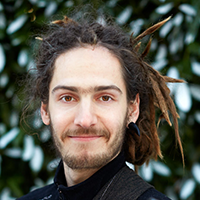 After my undergraduate degree in geoecology, and especially after a Bachelor’s project on the phylogenetic relationships and diversity of fungi I choose to change my field of studies to bioinformatics and computational biology. I wanted to be able to thoroughly understand the tools I was using and develop improvements or new tools by myself. Nevertheless, as I was mainly interested in those methods as a way to understand relationships between organisms (from an evolutionary as well as from an ecological perspective), I did not want to abandon geoecology neither. At the University of Tübingen I’ve had the awesome possibility to study both degrees in parallel, and I learned a lot about bioinformatics as well as evolution and biodiversity during this time. The background from both my studies was applied during a joint Master’s project, where I evaluated bioinformatics methods for the assessment of species diversity in environmental DNA samples using metabarcoding and applied those methods to a next-generation-sequencing dataset generated from symbiotic fungal communities in roots and soil.

During the SINGEK ESR 5 project, I will analyse single cell genomics and transcriptomics data of novel microeukaryotes to gain a better resolution, especially of the base, of the eukaryotic tree of life and model the genomic relationship between early eukaryotes and archaea, which have been recently identified as closely related to the ancestor of eukaryotes. As single cell genomics as well as the analysis of such data is still an emerging technology, the project will cover both biological and computational aspects.