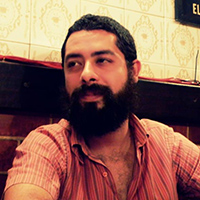 I am a Biologist from Brazil (UNISINOS), Master in “Biodiversity and Evolutionary Biology” (UFRJ) and currently a PhD candidate from Université Pierre et Marie Curie – Sorbonne in the Observatoire Océanologique Banyuls-sur-mer working in the group “GENOPHY” with marine microalgae and its bacterial and viral interactions. My SINGEK ESR 9 research project is “Genomic insights into green microalgae and their interactions with viruses and bacteria”.

I took part of the “Summer School Scholar”, NASA Astrobiology Institute (2012) in Santander/Spain. Today, I am a science blogger who writes in “Crônica das Moscas” from the “Science Blogs Brazil” network and during the last years I’ve been trying to promote scientific literacy as tools to build a better reality through public lectures at schools and universities.